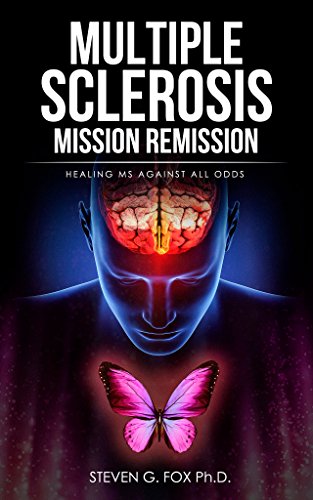 This book describes the chronology of events that led up to getting diagnosed with multiple sclerosis. Dr. Fox describes in depth the family dynamics and child abuse he believes laid the foundation for being susceptible to getting MS. It is a detailed look at how a psychologist constructed a treatment and personal approach that sent Multiple Sclerosis into remission.

The many medical approaches are described in depth. Medications are seen as primary in the initial and acute stage when first diagnosed. Alternative, spiritual, Eastern, psychotherapy, daily living, and diet approaches are covered in this guide on how to cope with chronic illness.
Multiple sclerosis is viewed as a disease where many factors come together to trigger the illness.

The key to sending an individual’s MS into remission is seen as finding the unique combination of factors that will tip the scales into sending multiple sclerosis into remission for that person. Given that the disease is idiosyncratic to the individual, not all approaches detailed in this book will likely work for a given individual. On the other hand, it is likely that many of the approaches will work because they are generally healthy, in the case of alternative and psychological approaches. The medical approaches are specific to multiple sclerosis and have been successful for many people.

The underlying philosophy is one of using primarily medical approaches when first being diagnosed with the disease, and then bolstering the fight against multiple sclerosis with generally healthy psychological, physical, spiritual, and alternative means.

Chapter 1 The Thunderclap My vision went double. My speech slurred. I dropped things. I sometimes fell down for no reason. My wife, being the board-certified psychiatrist that she is, insisted that I consult with a neurologist. The neurologist performed numerous tests and procedures. It was time for us to meet the good doctor and hear the results. When we went to obtain the results, the neurologist mumbled a few words and looked down at the floor while he spoke. I processed nothing of what he was saying to me. Repression is a remarkable phenomenon. He talked to my wife for what seemed like a long time. Driving back from the doctor’s office to the Arizona State University Student Health Center, where my wife was the psychiatrist on the eating disorders team, Debby was uncharacteristically quiet. When we drove into Student Health and I stopped the car to let her out, I found out why. “Well, I guess we will keep trying to figure out what is going on with me,” I said with resignation. “What are you talking about? The MS looks severe,” she said. Deborah never suffered a fool well. “MS?” With disbelief Dr. Deborah Brogan said, “Didn’t he tell you that you have MS, multiple sclerosis?” “What?” I asked. Debby answered, “You heard me. The doctor said you have multiple sclerosis.” So, it began, my fifteen-year journey through purgatory. I thought I must have made serious mistakes in a previous life. At the time, it seemed as good an explanation as any for why I contracted multiple sclerosis, MS. It turns out that I probably contracted multiple sclerosis because of conditions I endured in this lifetime, including the cold climate I was born into in the Midwest, abuse I had endured as a child, drinking too much diet soda with aspartame, frequent bronchitis, genetics, a car accident when I was thirty-one years old, working out in a hot karate studio, etc. MS is a syndrome that I believe is ignited by a host of various factors coming together. I believe it to be the exception, rather than the rule, for multiple sclerosis to occur from only one causative factor. I think that is why MS must be fought on numerous fronts—it probably was caused by the totality of a life assaulted on many fronts, just as it affects every aspect of life.”

This book is the story of how I went into full remission after 15 years of primary progressive multiple sclerosis. Amen.