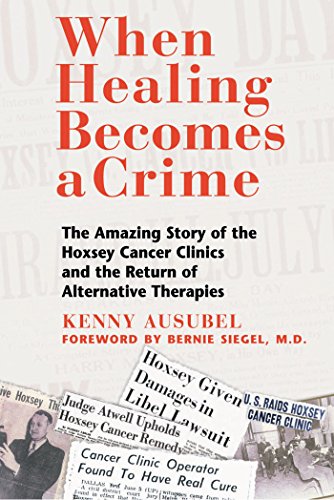 A powerful and substantiated expose of the medical politics that prevents promising alternative cancer therapies from being implemented in the United States.

• Focuses on Harry Hoxsey, the subject of the author’s award-winning documentary, who claimed to cure cancer using herbal remedies.

• Published to coincide with the anticipated 2000 public release of the government-sponsored report finding “noteworthy cases of survival” among Hoxsey
patients.

Harry Hoxsey claimed to cure cancer using herbal remedies, and thousands of patients swore that he healed them. His Texas clinic became the world’s largest privately owned cancer center with branches in seventeen states, and the value of its therapeutic treatments was upheld by two federal courts. Even his arch-nemesis, the AMA, admitted his treatment was effective against some forms of cancer. But the medical establishment refused an investigation, branding Hoxsey the worst cancer quack of the century and forcing his clinic to Tijuana, Mexico, where it continues to claim very high success rates. Modern laboratory tests have confirmed the anticancer properties of Hoxsey’s herbs, and a federal govenment-sponsored report is now calling for a major reconsideration of the Hoxsey therapy.

When Healing Becomes a Crime exposes the overall failure of the War on Cancer, while revealing how yesterday’s “unorthodox” treatments are emerging as tomorrow’s medicine. It probes other promising unconventional cancer treatments that have also been condemned without investigation, delving deeply into the corrosive medical politics and powerful economic forces behind this suppression. As alternative medicine finally regains its rightful place in mainstream practice, this compelling book will not only forever change the way you see medicine, but could also save your life.Used Book in Good Condition